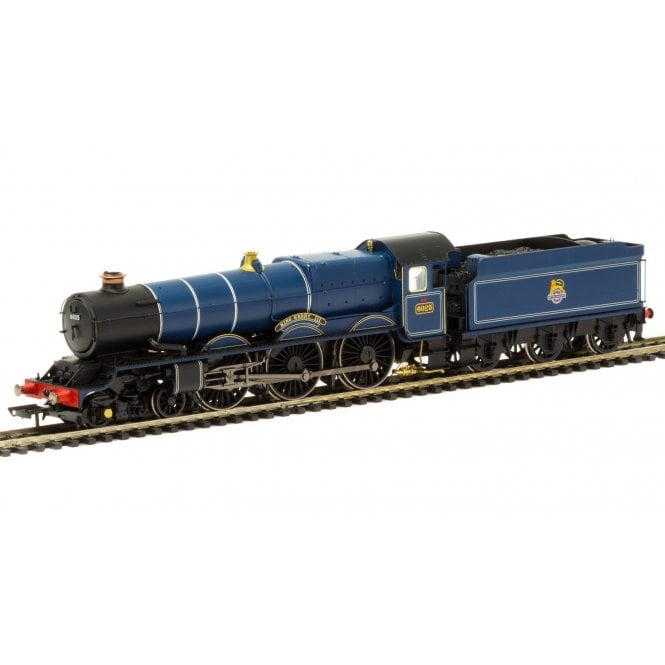 In the mid-1920s, with train load sizes increasing to and from the South West, the Great Western Railway were faced with the need for even more powerful locomotives, capable of hauling the heavy expresses at an average speed of 60 mph. The main routes were limited to a 20 ton axle weight though, so a number of the Great Western’s routes had to be upgraded, including the strengthening of some bridges, before the Great Western’s General Manager, Sir Felix Pole, would give his Chief Mechanical Engineer, Charles Collett, permission to proceed with the design and construction of a "Super-Castle".

The result was the King class 4-6-0, which emerged from Swindon works in June 1927, a design that increased the length and wheelbase over the Castle class, necessary to accommodate the new WA designated boiler. The driving and bogie wheels were reduced in size from that of the Castles and the boiler working pressure increased to 250lb, with a larger diameter cylinder and a longer stroke. The Great Western promoted the new Kings as “the most powerful passenger locomotives in the country” and at 29ft 5in and weighing 89 tons, the class probably represented the limit of the 4-6-0 design.

Initially, twenty locomotives were ordered, the first six being built at Swindon in June and July 1927, followed by the remaining fourteen locomotives between February and July 1928. The final ten locomotives of the class were not to be built for another two years, being constructed between May and August 1930 and they incorporated some minor changes from the earlier engines. The decision to name the new class after the Kings of England was agreed by Collett in May 1927, being named in reverse chronological order starting from King George V. Only two engines were renamed, 6028 King Henry II becoming King George VI on January 12, 1937 and 6029 King Stephen becoming King Edward VIII on May 14, 1936.

We charge just £3.95 for your delivery - whatever the value of your order

All deliveries via Royal Mail & Parcelforce should be completed within 3-5 working days.

Your total basket value will also include estimated delivery charges and will be added to your final checkout price.

When possible we offer Express delivery within the UK for £9.95.  Your purchase will be sent via DPD next day service on the next available collection, that may be the following day depending on when your order is placed.

All delivery charges are subject to conditions on total product(s) weight.

We will refund goods up to 14 days from the date of original purchase. No refunds or exchanges will be given after this 14 day period.

Returned items should be unused and must be returned in original packaging with any enclosed documentation. We will issue a refund of the purchase price on receipt.

A deduction will be made if the value of the returned goods has been reduced because of handling.

International carriage is shown on checkout, please note we can not deliver to PO Box numbers

We are committed to protecting your privacy. We will only use the information that we collect about you lawfully (in accordance with the Data Protection Act 1998). We collect information about you for 2 reasons: firstly, to process your order and second, to provide you with the best possible customer service.
We will not e-mail you in the future unless you have given us your consent.
We will give you the chance to refuse any marketing email from us or from another trader in the future.

The type of information we will collect about you includes:
Your name
Address
Phone Number
Email Address
Credit/Debit Card Details
We will never collect sensitive information about you without your explicit consent.
The information we hold will be accurate and up to date. You can check the information that we hold about you by emailing us. If you find any inaccuracies we will delete or correct it promptly.
The personal information which we hold will be held securely in accordance with our internal security.
We may use technology to track the patterns of behaviour of visitors to our site. This can include using a "cookie" which would be stored on your browser. You can usually modify your browser to prevent this happening. The information collected in this way can be used to identify you unless you modify your browser settings.
We do not disclose buyer's information to third parties. Cookies are used on this shopping site to keep track of the contents of your shopping basket once you have selected an item, and to store delivery addresses. You can ask to be removed at anytime by letter or e-mail.

Resale
Goods purchased from us may not be used for resale.

Complaints
We strive to provide the very best service and make sure this site is working well and all information kept up-to-date. If you have any complaints or see anything that you know to be incorrect please email us so that we can correct it. We will acknowledge your complaint within 5 working days and inform you of how we will intend to resolve the dispute.